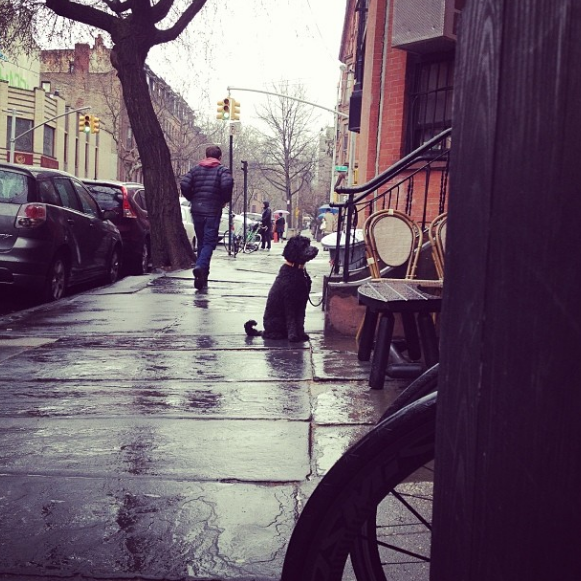 I’ve been having this ongoing argument with friend of mine­­.

She’s a talented comedy writer, but also a terrible
scatterbrain. And despite her best intentions to boost productivity, she finally
threw up her hands and said:

“I just need a discipline transplant.”

Which, ironically, is a pretty funny premise, and would make
a great comedy bit, but I don’t think she has the discipline to write it.

Still, this is a topic I’ve been researching, publishing,
lecturing and training on for many years. And what I’ve come to believe is, discipline
is best approached when reframed as devotion.

Instead of finding time to do the work every day, you commit
to making the work a permanent fixture in your daily life. That way, it just
happens. Discipline becomes a non negotiable. A non thought. Instead of burning
calories preparing to get ready to think about the possibility of potentially planning
to do something, you just start. You invest all your physical and emotional and
mental labor into the work itself, not in debating whether or not you should do
it.

The only problem, most people aren’t wired that way.

Discipline might be interesting and meaningful and easy for
some, but for the majority of the population, the pure, unromantic slog of
sitting down every day and creating something, is painful.

And so, for people like my comedian friend, those who aren’t
skilled at doing things they don’t want to do, I’ve developed a less
threatening strategy:

You have to trick
yourself.

When I
started my publishing company right out of college, the best thing I ever did was
impose a reverse curfew. I made a daily bargain with myself to
be out of the house by seven o’clock, every morning. In part because I still
lived with my parents, in part because I was hungry for recognition, but mainly
because I wanted to trick myself into thinking I actually had a real job.

The
first few days took some adjusting, but after about two weeks of holding
this metaphorical gun to my head,
I started to see how the micro accountability of a reverse curfew could net productive
results.

First, by
putting myself on this deadline, I never let the morning slip away. That ensured
my days began with a cadence and rhythm that included movement. Second, the
reverse curfew established a sense of place and a sequence of rituals. I went
to the same coffee shop and ordered the same drink and sat in the same booth,
every morning. Finally, the
daily obligation of leaving the house contributed to my meaning quota,
preventing the anxiety of inconsequentiality from crashing in. This enabled my ideal
mental, emotional and existential space from which to create.


Interestingly,
law enforcement officers have been using this tactic for years.

I was recently
reading an article about a guy whose bail condition included an electronic
bracelet that enforced a reverse curfew. He was required, by law, to be out of
the house during daytime hours, so he could focus on being a productive member
of society.

Also, transitional housing programs use this measure with a variety of populations. Children aging
out of foster care, inmates with upcoming release dates and homeless families are
a few groups of people who use reverse curfews. Their lodging facilities impose
strict schedules in which they’re not even permitted in the house during the day, since they’re expected to be out in
the community, applying for jobs, attending classes or doing other productive activities.

That’s
how you trick yourself.

And so, reverse curfews work because they create
ambient pressure. They force people to build internal and external constructs,
with varying levels of severity and consequence and connection, all of which
motivate them to stay disciplined.

Years
ago, my mentor suggested I build a calendar feature into my website. He said it would be useful tool for motivating
sales activity and creating the discipline of making daily sales call.

Understatement of the year.

Turns out, the simple awareness of knowing that calendar was public
facing painted me into an accountable corner, forced me to fill more dates and shamed
me for not having enough work on the books. After all, as a freelancer, you
fear the empty calendar. It’s a
visual reminder of inactivity and, often times, an indication of financial
instability. And so, even though the calendar was only one innocuous page on my
website, it still created the ambient pressure, the dangling sword of obligation,
which motivated me to stir the pot and keep
finding work.

It’s how I used technology to trick
myself.

But not all discipline strategies have
to be as severe and explicit as reverse curfews, electronic
bracelets and online calendars. Discipline is also something you can back into.
I’m reminded of a mantra from one of my yoga instructors:

The shortest distance to the heart is through the
body.

Meaning, if there’s something you want
to feel, if there’s an emotional experience you want to work through, you can
back into it by changing your sheer physicality.

Take vulnerability, for example. If you
want to practice being seen as you truly are, allowing yourself to be
affected by the world around you, camel
pose is the perfect posture. Not only is it
the deepest backbend of the hatha series, it’s also only posture that fully
exposes your throat, heart, belly and reproductive organs, all at the same
time.

Doesn’t get much more vulnerable than
that.

I remember my first few months as a
yogi. What I found was, the more I practiced, the more my body adapted. And
after about a year, I finally bent my way to the full expression of camel
pose. Interestingly, I also noticed greater vulnerability in other areas
of my life. My openness to risk and uncertainty and emotional exposure
dramatically increased. I also started crying in public a lot more.

Because as the body goes, so goes the
heart and mind.

Think about it. Why do students who play sports in high
school statistically achieve higher grades than non athletes? Because
discipline breeds discipline. It’s a classic domain transfer. The mindset and
muscle memory from playing on the ball field transfers over to studying in the
academic field.

Similarly, if you want to back into discipline, start by
committing yourself to a completely different habit first. One that’s small, easy,
private, and if possible, physical. If only for the sole purpose of acclimating
your body and mind to what discipline feels like. That way, once you slay that
dragon, you can graduate to building discipline with more significant, public
activities.

That’s how you trick yourself.

The point is, if you’re not the committed type, if you’re
not the kind of person to reframe discipline as devotion, all hope is not lost.
You can still implement a few of these less threatening strategies to get
creative work done. And perhaps you won’t have to worry about getting on the
national donor list for that discipline transplant after all.