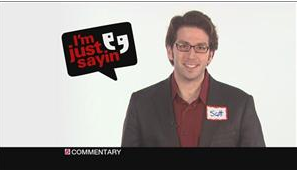 My piece is called, Don’t Blame Facebook for Your Divorce.

If you can, leave a comment or two after the video. The more traffic they get, the more they’re likely to hire me again for future pieces. Thanks!

LET ME ASK YA THIS…
What are you just saying?

LET ME SUGGEST THIS…
For the list called, “19 Telltale Signs of the Perfect Job,” send an email to me, and you win the list for free!