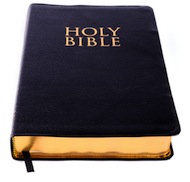 The Bible is interesting.

It’s the most popular, most printed, most published, most
purchased, most read, most recognized, most translated, most demanded, most
donated, most circulated, most owned and most influential book in the world.

But it’s also the most
stolen.

And yet, people rarely put up a fuss. In fact, it’s the
exact opposite. Every time another copy is stolen, the people who love the book
the most never view it as a loss, but as a new opportunity to inspire someone’s
life.

That’s how passionate they are about their message. They’d rather let people
steal the very book that instructed them to be honest in the first place, than
risk watching another soul go unreached. I even met a woman
from a local congregation who said their church allows anyone who doesn’t own a
Bible, to steal one.

Talk about turning the other cheek.

Maybe piracy is the most profitable thing that could ever
happen to a brand.

Is your product worth stealing?

For the list called, “8 Ways to Out Question Your Competitors,” send an email to me, and you win the list for free!

Every Interaction is a Chance to Change Somebody’s World
The Spirit of Experimentation
Are You Using Your Talents or Investing Them?