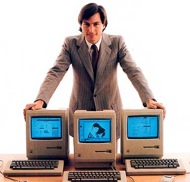 “The best way to predict the future is to invent it.”

At the time, he was working in the research department of Xerox. But, as innovative as he was, he failed to convince the higher-ups that his new programming ideas would revolutionize computing.

Eight years later, pioneers from Apple Computers used Kay’s ideas to develop a revolutionary, user-friendly computer called The Macintosh. In the end, Alan’s vision for the future changed the face of technology forever.

That’s what happens when stop predicting the future and start inventing it: You don’t just make money – you make history.

THE COOL PART IS: You don’t need to be a computer scientist to be ahead of your time. You just need to bear the daily fruit of an indomitable spirit of innovation.

Here’s how:1. To be cutting edge, live on the edge. When Barbie hit the scene in 1959, she was the first adult doll. And she allowed girls to do more with a doll than just change pretend diapers and feed pretend bottles. Barbie was all grown up. She was mature. And she could do real things with her friends. Which meant playtime was endless.

Is it any surprise, then, that ninety percent of all girls in America between the ages of three and ten have at least one Barbie? Or that three Barbie dolls are sold every second somewhere in the world?

Nope. Hell, Barbie was Miss Astronaut in 1965 before women were even allowed in the space program. Our country didn’t send another woman to space until Sally Ride in 1983. Talk about being ahead of her time.

Barbie wasn’t just a hunk of plastic – she was a hell of a pioneer.

And if you want to learn from her example, here’s my suggestion: Envision a future most people aren’t ready for. Then, spend your days bringing it to life. Tackle untouchable issues and revolt against the orthodox doctrine of the day.

Whatever it takes catch the public by surprise. You’ll be ahead of your time in no time. When people play with you, how does their world change?

2. Do more experimental work. Few musicians were – and still are – more ahead of their time than Brian Eno. As the former frontman of Roxy Music, and as the principal innovator of the ambient genre, Eno makes enthusiastic use of all that technology has to offer.

He just tries things. He experiments. And his insatiable desire to tinker and toil with every tool available fuels his ability to innovate consistently. In his immortal words, “Art is the one place where we can crash our plane and walk away from it.”

To infuse your creative practice with Eno’s winning attitude, here’s my suggestion: Gently move toward that which scares the crap out of you. Next time you have a radical idea that makes your stomach drop, don’t run from it.

Listen to your body. It’s trying to guide you. Lean into your worry with all your might. And remember that if you’re not scaring yourself – you’re not stretching yourself. Comfort zone? Pshht. Are you willing to set up basecamp in uncharted territory?

3. Don’t be selfish with your brain. You can’t keep your thoughts to yourself. Ideas weren’t meant to stay ideas. And the people who change the world never do so with their mouth closed.

Don’t worry – nobody is going to steal your thunder. That is, not if you’re smart enough to be so identified with your work that nobody could steal it, and if they did, people would know it.

What you have to remember is, when you share your expertise generously, people will recognize it, became addicted to it and eventually depend on you for it. Hell, they might even have something to add to improve it.

Whether you increase your creative openness, ramp up the frequency with which you publish your ideas or solicit more feedback from the people who matter most, your efforts will not go unrewarded.

You just have to be willing to share. To trust that the more you give away from free, the wealthier you will be. And to have faith that the world will pay you back. Who have you shared your creativity with today?

4. Hack the rules. Don’t break them – hack them. Huge difference. According to the bestselling Trust Agents,

“Hacking is about finding alternatives for the traditional uses of a system. It’s about modifying the conditions of the system you’re in. Hacking isn’t cheating. It’s changing the rules or the game and using a system in a different way than it was designed.”

The way I see it, you have three options: Change the rules so you can win at your own game, change the game so there are no rules, or play the game but become the exception to every rule.

Easier said than done, I know. The secret is to constantly ask rule-hacking questions, i.e., “What corners can be cut here?” “Can this rule be ignored, modified or changed?” “Is this a rule or just a recommendation?” and my personal favorite, “What could I do in this moment that would be the exact opposite of everyone?”

Over time, hacking will become second nature and your idea will become first rate. Either that, or you’ll get arrested. What are the exceptions to the rules that helped you succeed?

5. Offer a complete deviation from old school style. That’s how the greatest musicians expanded the boundaries of their genre: With broadly sweeping scales, rapid changes of register, unusual divisions of beat, extremes of tempo and dense chordal textures.

Even if you can’t play a lick, the lesson is universal: Always retain contempt for imitation and mediocrity. Don’t wait for the advent. Establish your own industry standards. Test the definitional boundaries. Transcend the medium. Make it your goal to be able to finish the following sentence:

After encountering my work, people will never thing about (x) the same way again.

That’s how you become a vital force. It starts with believing that you were designed to make a distinctive difference. Otherwise, if you don’t operate from that place of worthiness, you’ll never execute anything that’s ahead of its time. Are you distinct or derivative?

6. Never shut down your curiosity. Amazed at his ability to be one step ahead of his enemies, Watson once asked Holmes, “How is it that you always see everything?” To which Sherlock replied, “Because I’m always looking for it.”

That’s what most people don’t realize: Curiosity might have killed the cat – but it also makes you a lot of money. And history proves time and time again that the most successful, most celebrated and most ahead-of-their-time people in the history of planet were the ones who asked dangerous questions despite overwhelming efforts to silence their enthusiasm and deflect their curiosity.

If you want to become one of those people, here’s a few questions to keep your curiosity in check:

*Do you keep a running list of questions?
*How often are you flexing the muscle of huh?
*Do you dare to be dumb and refuse to discard hunches?
*Have you commenced an unrelenting quest for continuous learning?
*Are you studying ordinary things intently and finding interesting?

That should morph you into a giant question mark in no time. Are you making time to be curious?

7. Do your own thinking. You’d be amazed how many people delegate this task. They wimp out and let their friends, their company, their family or the media think for them.

Yes, it’s easier and faster – but it’s also stupid and dangerous. And if you’re not willing to ask yourself what you think before adopting the perspective of the masses, you’re not an innovator – you’re a sheep.

Look: People will try to define who you are and then make you believe that definition. You can’t let that happen. Take a hint from novelist Ayn Rand. She was more ahead of her time that most of her literary contemporaries. Not only because she grappled with questions most people didn’t even have the guts to ask, but also because she asked people to ask her about her thinking.

You must strive to reevaluate commonly held ideals. You mist stick closely to the shape of your truth. And you must exhibit intellectual toughness and uncompromising progressive character. No matter how many haters opposes you. No matter how many times you’re hit by the snarls. Are your thoughts 100% your own?

8. Study the anatomy of innovative talent. I’m obsessed with documentaries. Doesn’t matter what the subject is. If I can invest ninety minutes dissecting the world of someone smart and cool, count me in. I even keep a journal on my coffee table to document powerful lessons learned from people who were ahead of their time.

You have to make time in your schedule to saturate yourself with inspiration from those who dared to challenge the odds. Whether you watch, read or listen, the process always invites a few cool things.

And finally, you’ll get into their lives. That’s the best way to find out how to embody an innovative spirit. Look: Success leaves clues. Everywhere. What’s your learning plan for finding them?

REMEMBER: You don’t need to be a computer scientist, bestselling novelist, corporate conglomerate or hall of fame musician to invent the future.

But you do have to answer the call to adventure.

Do that, and you’ll be ahead of your time in no time.

LET ME ASK YA THIS…
Is the future a place you’re avoiding, going or inventing?