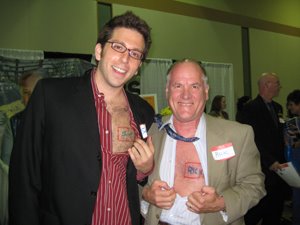 OK, so, this HAS to be on my list called:

Rick, the president of the KC CVB, came right up to my book table, ripped open his shirt and showed me HIS nametag tattoo.

Thanks for making my week, Rick.

Man. After 2,787 days, I thought I was the only one. So much for being original!

LET ME ASK YA THIS…
What’s the craziest thing you’ve ever seen an audience member do?

LET ME SUGGEST THIS…
Go to Kansas City. Those guys ROCK!

Some of the best and the brightest in Collier County’s tourism and hospitality industry were saluted Wednesday at the Paradise Coast Star Awards luncheon program at The Ritz-Carlton Golf Resort.

I gave a talk about approachability AND presented the first ever “Approachability Award.” The candidate was selected as someone who epitomized “sticking yourself out there” and “getting them to come to you.”

See pictures from the event!

Watch my interview with Judd Cribbs!

LET ME ASK YA THIS…
Who would you nominate for the approachability award?

LET ME SUGGEST THIS…
Tell us why here! 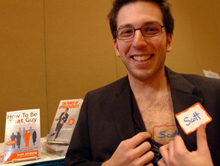 Today’s article in the Pittsburgh Tribune Review proves (once again) that I am, in fact, insane:

PITTSBURGH – There have been a lot of changes in the last 2,288 days of Scott Ginsburg’s life — from the constant need to buy shirts to a change in his attitude.

“I’ve always been a pretty friendly, outgoing guy. Now that I’m always wearing a name tag, I’m even friendlier,” said Ginsburg, 26, of St. Louis. “Plus, I’ve had to buy a ton of shirts. I never realized what a name tag can do to your clothing.”

Ginsburg, commonly known as “That Guy with the Nametag,” was the featured speaker at Tuesday’s International Networking Day event at the Hilton Pittsburgh and Towers, Downtown. He’s worn a name tag daily since Nov. 2, 2000, and has built his life around the idea of always being approachable.

Deanna Tucci Schmitt, executive director of Business Network International of Western Pennsylvania, said Ginsburg’s idea of approachability is the crux of what networking is about, something she realized after hearing a presentation by Ginsburg last fall.

She said people often don’t know how to approach networking in a way that doesn’t alienate others. What people should do, Schmitt said, is take a cue from Ginsburg and be friendly and open, and find common ground to break the ice.

“He took this silly little thing of wearing a name tag and has applied it in a global way everywhere else in his life,” Schmitt said. “He must be the most approachable guy I’ve ever met.”

Ginsburg wants people to market themselves, something he does convincingly. In the six years he’s been wearing a name tag full-time, Ginsburg, the author of three books on networking and approachability, estimates he has met 100,000 strangers. Some have become close friends, others have become clients and many he’s never seen again. Ginsburg even took wearing a name tag to a new level when, in November 2005, he had one tattooed on his chest.

“It really wasn’t practical to wear a name tag in some situations. It starts to look like a scene from ‘The 40-Year-Old Virgin,’ ” Ginsburg said. “I figured, what better way to solidify my commitment to this as my life than to desecrate my body.”

Mary McKinley, an adjunct professor at Duquesne University and director of its Chrysler Corporation Small Business Development Center, said Ginsburg has the right idea. Approachability, she said, is something many people don’t think about. But it can affect that ever-so-important first impression.

“You only have about 30 seconds to make an impression on someone,” McKinley said. “And a lot can be said in those 30 seconds.”

Ginsburg said his philosophy can work in any aspect of life, whether people are looking to enhance their business or their personal lives.

“You want to take every one of the opportunities you get to engage a person, no matter what the setting. Broadcast your uniqueness,” Ginsburg said. “It’s about being ‘that guy’ and being known for something. Who knows what’s going to happen, or how it will turn out. But you have to try.”

LET ME ASK YA THIS…
Ever had a steak cooked Pittsburgh Style?