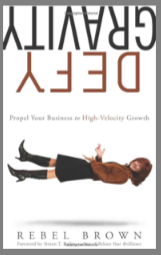 This year, I celebrated my thirtieth birthday.

But instead of spiraling into the typical self-loathing, woe-is-me, I’m-not-satisfied-what-I’ve-accomplished-in-my-life-so-far pity party that most thirty-year olds resign to, I made a choice:

I’m not turning thirty – I’m upgrading to the 3.0 version of myself.

Pretty cool concept. I don’t know where I came up it, but here’s what it means:

Commemorating a major life change.
Staying in stride with upward, progressive movement.
Surrendering to the next phase of your personal evolution.
Letting go of the person you were in order to grow into the person you needed to be.

So far, it’s been an enlightening, complex and exciting journey. And although it’s not over yet, I’ve learned a few cool lessons I’d like to share with you – each of which support the following thesis:

Those who upgrade, win.

It shatters complacency.
It invites opportunity.
It enables victory.

Plus, chicks dig it.

Whether you’re an individual, a corporation, an organization or global micro-brand, consider these strategies for upgrading to the next version of yourself:1. Constantly question your own value. As my friend Rebel Brown explained in Defying Gravity, “If we have a faulty assumption, we have a faulty derivative. And when that derivative is used to create even more derivative numbers, the impact of that single wrong assumption multiplies geometrically.”

And it’s painful to admit, but maybe all this time you were confused between (a) what got you in the door, (b) what brought you to the table, and (c) what kept you in the room.

Because those three things are not the same. And that’s the problem: It’s rare that you define your own value. You’re simply too close to the subject to make an honest, objective assessment.

For that reason, evolving beyond the previous version requires objective feedback. Ideally, from the people who love you enough to tell you how dense and blind you’ve been in the past. This helps create the best possible circumstances in which your growth will be supported, enhanced and fulfilled.

Trust me: Ask them today, or risk remaining the same tomorrow. Have you identified the truly distinct values that will fuel your future momentum?

2. Find evidence of your wrongness. Which isn’t as hard as it sounds. My cousin Collin, a tuberculosis researcher, talks about this phenomenon the time. It’s called confirmation bias, and the simple definition is, “Whatever you’re looking for, you’ll find,” he says.

This is a good thing – it should be easy to find evidence of your wrongness. I challenge you to spend some time asking yourself which of your assumptions might be misguided. Yes, questioning your own logic is probably more confrontational than you’re used to.

But as Rebel Brown reminds me, “Humans have the knack of proving things right when it’s important to them.” Lesson learned: Make it important to you and you will make it right. Or in this case, wrong. How will you beat your own math?

3. Familiar is a form of baggage. Investing in the old version of yourself pays meager dividends. I’ve tried it. The cost of supporting past weight is simply too expensive.

My suggestion: Never forget to focus forward. Save your resources for upgrade-rich activities only. Jettison the drag and employ enough velocity to soar into the next version of yourself. Otherwise, using your past to define your future is like wearing bell-bottoms to an interview for a job on Wall Street.

Eventually, you’ve got to upgrade, or you’ll get creamed every time. Especially if your boss is Michael Douglas. Are you wasting eighty bucks having your old shoes fixed when you could just spend a hundred on a new pair?

4. Grow leaner. Rebel broke this down simply and powerfully in her book: “The bigger we get the slower we are to respond. We carry more weight, making it even harder to change course. And we view change as a disturbance in our carefully laid plan rather than as an opportunity for high-velocity growth.”

Maybe that’s the secret to upgrading: Having less so you can be more. After all, big isn’t necessarily better. In the words of raconteur Henry Rollins, “Life is a process of learning what you can live without.”

Which means: You have to destroy who you were to become who you need to be. Which means: Throttling up your growth starts with throwing away your trash. What habits do you need to jump out of to reinvent yourself?

5. Rewrite your definition of victory. When you start out as a writer, you just want to be read. And liked. And talked about. And maybe paid.

Then, after a few years, things change: Now you just want to be taken seriously. And trusted. And not just read widely – but heard deeply. And maybe paid a little more.

Eventually, however, once you’ve stabilized your career, moved out of your parents’ basement and figured out how to earn a real living doing what makes your heart sing, you come to the realization that all of the vainglorious crap you used to want was nothing but the preamble to what your soul truly aches for:

To matter. To be essential. To become necessary to the world. To make meaning in the universe. And to serve something bigger by regifting your talents to the masses.

Now, I don’t know what it’s like in your industry, but that’s how it works for me. And I challenge you to think two things: First, how your definition of victory has changed over the years, and second, what new strides you’re going to have to take get there. What does winning look like to you?

6. Destroy yourself to reinvent yourself. “Keep doing what you’re doing and risk staying where you are.” I learned this very early on as a professional speaker. Because you can’t keep telling the same stories. You can’t keep using the same material.

Otherwise you bore people. Worse yet, you bore yourself. And that’s when you know you’re really in trouble. I’ve actually done that before, and let me tell ya, there is nothing more existentially agonizing that growing tired of your own act.

Lesson learned: If you don’t obsolete your own stuff, you risk allowing someone else to do it for you. Which means you become obsolete too. On the other hand, if you make your own material obsolete, at least you’re still you. Thank God.

My suggestion: Look at what you’re doing today, think about how you can destroy all of that to create a new you and watch the previous version of yourself melt like a snowball in the sun. What are you afraid to let go of?

7. Creative destruction is a necessary and courageous strategy. You know all those earthquakes, tsunamis, floods and mudslides? Not an accident. And it’s not the fault of the New Orleans sinners living a life of homosexual transgression.

It’s just nature being nature. It’s just nature doing what she’s done for billions of years: Devastating her own landscape. Why? Because devastation stimulates new growth. Not only in nature – but in business and in life.

That’s the irony: If you don’t devastate your own landscape regularly, you hold yourself hostage by something that, while it might be working, is limiting your growth.

Try this: Constantly ask yourself questions like, “What will this destroy?” “Will it be worth the risk to destroy this?” and “What can I create that will destroy what I already have that’s successful?”

Ultimately, it all goes back to entropy: If it’s not growing, it’s decaying. Which one do you experience more?

8. Nothing fails like success. Failure is the fun part. I don’t know about you, but if there’s one thing that wakes me up shivering in a cold sweat in the middle of the night wishing I still had my Teddy Ruxpin, it’s success. Blech. Winning? Are you kidding me? Can anyone imagine a more terrifying prospect than getting exactly what you want?

Two examples. First, it’s like the fear of having your books (actually) being read, instead of being ignored. Why does that scare us? Because with great success comes great responsibility. And who the hell wants to deal with that?

Second, the other reason I fear success is because my mentors educated me early on in my career: The arrogance of past victory becomes the aerosol of future failure. As such, you need to recognize that legacies not only jeopardize your growth, but also fuel the gravity that handcuffs you to the past version of yourself that’s not gonna cut it anymore.

Ultimately, complacency is the great growth-destroyer. Avoid it like the clap. Will the next version of you drown in its wake?

The challenge is that self-knowledge of this variety doesn’t come easily. It’s a function of your willingness to get very honest with yourself. It’s dependent on your self-control to say no when saying yes would go undetected by the masses.

And it’s reliant on your discipline to ask questions like, “Is this an opportunity or an opportunity to be used?” “Will this contribute to the best, highest version of myself; or create a mediocre future that I’m going to feel obligated to be a part of?”

The equation is simple: Get pickier – grow profitabler. What have you said no to this week?

It forces you to drive out complacency.
It enables you to turn the page on the next chapter.
It permits you evolve into the best, highest version of yourself.

Whether you’re a person, company, organization or brand, remember one thing:

Those who upgrade, win.

LET ME ASK YA THIS…
What have you upgraded lately?

LET ME SUGGEST THIS…
For the list called, “14 Things You Don’t Have to Do Anymore,” send an email to me and you win the list for free!