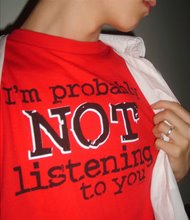 2. They haven’t been listened to first.

6. They’re tuning you out as a defensive device.

7. They’re too busy trying to change you first.

9. There’s too much noise, internally and externally.

10. They’re only speaking just to hear themselves talk.

11. They think they already know, um, EVERYTHING.

12. They’re impatient and want the bottom line, not your story.

13. They’re not open to what the you’re really trying to say.

14. They’ve resigned to the fact that they’re terrible listeners.

15. They have the human urge to be recognized and affirmed, which means they’re too busy TALKING.

16. They’re too eager to appear sympathetic and a good listener.

17. They’ve never been taught (or learned how to) listen properly.

18. They’d rather give advice, since doing so makes them feel important.

20. They’re afraid they might hear things they don’t want to hear.

21. They assume they already know what you are going to say to them.

22. They avoid conflict because they’re too busy protecting themselves.

23. They think they already know what the other person is (trying) to say.

24. They live in a hyperspeed, A.D.D. culture, and they don’t think they have time to listen.

25. They don’t want to lose (or risk losing) control of the conversation or in general.

26. They’re afraid that they might actually come to see something differently, and maybe even change their mind.

27. Their emotional reactivity was triggered by something you said, and it became so loud (internally), that they couldn’t hear your words (externally).

LET ME ASK YA THIS…
What do you think causes people (not) to listen?

LET ME SUGGEST THIS…
For a copy of my list called, “13 Roles of The Listener,” send an email to me, and I’ll send you the list for free!

Is your frontline IN line?

Tune in to The Frontline Channel on NametagTV.com!