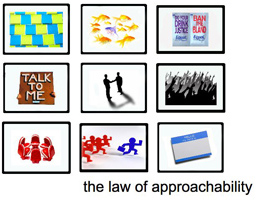 I figured since everyone else in the world already threw in their two cents about PowerPoint, I may as well do the same.

Here are my (only) two rules:

1. PowerPoint is for PICTURES
2. Slides = 8 words or less

Also, a lot of my audience members have been requesting my slides lately. I thought I’d pull a Tom Peters and just post them here for download.

LET ME ASK YA THIS…
What are your PPT rules?

LET ME SUGGEST THIS…
If you have some cool slides, link or post them here!

NSA St. Louis was set to host its annual Speakers U this weekend, in which veteran speakers share their experiences and wisdom about the speaking industry to prospective members.

Now, although I wouldn’t call myself a veteran, I was still excited about the opportunity to share what I’ve learned in my four short years in this business.

Unfortunately, we had to cancel. Not enough people signed up.

Which SUCKS, because I worked really hard on this new ebook.

Anyway, since I can’t give it out on Saturday, I thought I’d post it here. So, for those of you who’ve always wanted to become a professional speaker – or at least become a more effective speaker – here’s pretty much everything I know about the subject:

Enjoy. I’m off to San Fran to speak at the NAPS Conference.

LET ME ASK YA THIS…
What are your best pieces of advice on creating, delivering and marketing speeches?

That was easy. I spent last Friday in Boston speaking with my new friends @ STAPLES! Man, I was SO excited for this speech, as one of my favorite stories (that I’ve been telling for years to 1000’s of people) involves an old lady asking me to help her find the envelopes in a STAPLES aisle. I, of course, helped her find what she needed; although I did not receive commission.

We focused primarily on spreading word of mouth about That Guy inside (and outside) of an organization.

I suggested keeping a “Cool Journal,” in which you keep track of all things, people and events that are cool. If you’d like to try this idea, here’s how it works: on the left side of the page, write the name of the thing/person which is cool. On the right side, write WHY it’s cool, and what your response was, i.e., emailed all your friends, bought the product, etc. This exercise will help you gain an understanding of the properties of cool and enable you to increase you or your idea’s present coolness.

Now, since I’m a huge fan of the STAPLES Easy Button, and simply could not miss the opportunity to have a little fun with my favorite office supply chain, I closed my presentation with the following faux-advertisement. (Special thanks to Design Shark Studios for putting this comp together.)

LET ME ASK YA THIS…
What’s your favorite way to spread WOM about That Guy?

LET ME SUGGEST THIS…
Start your cool journal today! Email me your first five entries.

Do you want to be That Guy?

Find out how in 16 days with the release of Scott’s forthcoming third book!

Check out www.hellomynameisscott.com for all the juicy details!

Just finished up a full day of workshops for my friends up in Northwest Ohio’s Workforce Development.

Now, I say Toledo; but technically I spoke in Bryan, OH, home of Sauder Furniture. Man, I actually used to sell that stuff when I worked in retail 4 years ago!

At check in there was a plentiful supply awaiting my arrival. (Homer Simpson drooling sound.)

I got to my room with a mouthful of lollipops and noticed this DO NOT DISTURB sign.

Sweet! I wonder what time period it was made in? I wanna say the 50’s, maybe 60’s? I dunno. Do people still call them maids?

Anyway, the motel (yes, motel, not hotel) was kind of nice for a change; especially since I’d just come straight from speaking @ Burnett in Downtown Chicago. My room didn’t even have wifi, which, I gotta say, was also pretty nice. Woo-hoo! I don’t have to get up an hour early and blog tomorrow! More sleep!

The event was held @ NW State Community College, which had some of the best facilities I’ve ever worked with. Both of our sessions focused on front line and networking/interviewing approachability for displaced workers.

“Lead with your person, not your profession!” I said over and over.

COOL OBSERVATION: most common word that people “owned” and proudly wore on their nametags? Trustworthy. Interesting.

And once again, not to play favorites, but how could you not LOVE this one: Budaful.

No, she didn’t misspell it. That’s her last name: Buda. It’s Hungarian – awesome!

Oh, and for those of you who love your job…

Last but not least, a bunch of the students from the Youth Leadership Program stopped by to hang out. We took two pictures, one “normal” and one where I instructed each of them to “make a face like an idiot.”

God I heart my job!

Why do you heart your job?

You might know Leo Burnett as the worldwide ad agency famous for creating such icons as the Jolly Green Giant, the Marlboro Man, the Pillsbury Doughboy and Tony the Tiger.

I know them as my clients and my friends! And we had a fantastic program at their Chicago office yesterday. It all started in the reception area. As I eagerly awaited the arrival of my friend Kerry (pictured), I was cheerfully greeted by several employees. First, two girls walked by and asked, “Hey, aren’t you that ‘Scott’ Guy?” And then a man named Tom asked, “Hey, aren’t you The Nametag Guy?”

We had a great turnout for the popular “Burnett Fuel Session.” Our program focus was to learn how to be that guy in (and out) of the agency.

These were some of the coolest, brightest and friendliest people I’ve ever worked with. From strategic planners to creative geniuses to PR folk, all areas of the ad world were well represented.

A big part of my corporate workshops is to get the entire audience to wear nametags – at least for a little while! The first exercise is to stick a tag on your chest with your name AND a three word description of who you are. We had some classic monikers such as “The Googling Expert,” “Makes Advertising Sane,” and my favorite (see to the left) “That Guy Who Always Smiles.”

Another activity on the topic of word ownership was to answer the following question: “When clients think of me, this is the first word that pops into their heads.”

The exercise is to write that word in big, bold letters on your nametag and proudly wear it for the rest of the day. We had some great examples, like my friend Klista who wrote the word “teeth.”

(Check out that beautiful smile and you can see why!)

Another one of my fav’s was my friend and fellow Miami Redhawk Jenny, who appropriately wrote “upbeat.”

Amen to that! It’s not easy being upbeat in the advertising world these days!

The highlight of the workshop was when everyone closed their eyes and I walked around the room shouting out the words from various nametags: Passionate! Intern! Bubbly! Lanky! Dedicated! Organized!

And our favorite of the day…KUTA!

(It’s a bit of an inside joke. Guess you had to be there…)

Thanks to all my new friends at Leo Burnett!