A brand without focus is destined to be forgotten.

Success, therefore, is a process of elimination.

It’s learning what your brand can live without.

MY SUGGESTION: Stop your driving your brand all over the interstate.

You’ll either get pulled over, cause an accident or piss off the other drivers. Plus, it’ll take forever to get to your destination. And if you’ve got three screaming kids in backseat, you’ll want to get there as soon as possible.INSTEAD: Remember what you learned on day one of geometry class.

The shortest distance between two points is a straight line.

This is a mathematical truth.

AND SO: If the shortest distance between two points is a straight line, doesn’t it make sense – that when you’re cruising down the branding expressway – to just pick a lane and stay there?

Well, if you want your brand to arrive first it does.

THE CHALLENGE IS: How do you know which lane to pick?

That’s easy. Just fire up the only true GPS in the world – your heart. And consider asking yourself, your company and your brand these questions to figure out which lane to pick:

1. Will this choice add to my life force or rob me of my energy?

2. Does this choice add wood to my internal fire or sprinkle water on it?

3. Will this choice propel me toward an inspiring future or will it keep me stuck in the past?

4. Will this choice bring me long-term fulfillment or will it bring me short-term gratification?

5. If I make this choice, what will I be saying no to?

Look. People change lanes all the time. And there’s nothing wrong with that. The secret is to stay in your lane for as long as your brand can handle it. Then, when the time comes, move into another one.

Who knows? Maybe for you, it’s time to flip on your turn signal.

Or, perhaps it’s time to set the cruise control to eighty, crank up some Van Halen and drive your brand into the sunset.

LET ME ASK YA THIS…
Is your brand focused or forgotten?

LET ME SUGGEST THIS…
For the list called, “25 Questions to Uncover Your Best,” send an email to me, and you win the list for free! 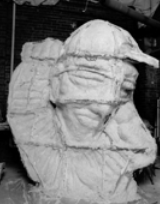 So, apparently, there’s a mold.

I was not aware of this.

I just assumed everyone thought for themselves.

According to a recent scientific study that I conducted yesterday by asking four of my friends, most people are other people. What’s more, further research proves that most people have no problem letting the world think for them.

THE ONLY PROBLEM IS: When you fail to question the constitution of the walls that enclose you, you insulate yourself from growth, learning and expansion.

If that scares you (which it should) consider this list of eight ways to break the mold without bruising your budget: (Photo credit from artist James Simon.)1. Be an obstructionist. Nothing illegal, Tex. Just the willingness to raise your hand and say, “Wait a sec – that’s not right.” This is the baseline posture where all mold breaking begins. When you let the world know that you’re not content to be a cog. When you refuse to the let the illusion play.

Instead, as an obstructionist, you stand up when everyone else stands mute. Then, inflamed with ardent desire, you verbalize your frustration and raise a howl of protest. That’s the only way anything will ever get broken around here. E.E. Cummings was right:

“To be nobody but yourself in a world that’s doing its best to make you somebody else, is to fight the hardest battle you are ever going to fight.”

Remember: Breaking the mold means breaking the silence. Make your voice heard by the people who matter. Have you raised your hand today?

2. Swim against the tide of what’s expected. When I assumed the presidency of my local association, my first mold-breaking order of business was to excise as much fat from our process as possible.

From removing redundant board procedures to axing inactive members that never attended meeting to deleting stupid expenses that drained organizational resources, the goal was to become lean and nimble. That way we could evolve as a chapter, as opposed to living a continued existence as an irrelevant integer.

The cool part was, all we had to do was stop, tilt our heads to the left and ask, “Why do we have to do it that way?” And most of the time, there was rarely an answer other than, “to satisfy the conventions of people who don’t matter.”

That’s how we broke the mold. That’s how we resurrected our chapter. And you have a similar choice in your own life, whether it’s organizational or personal: Will you yield gracefully to necessity or kneel obediently to mediocrity?

3. Exercise proactivity in environments designed to mitigate it. Some people will try to force you comply with their preferences; often times without rational justification or without respectful permission.

When this happens, the smartest thing you can do is to speak with a clear, sharp and committed voice. Let people know that you’ll be thinking for yourself, thank you very much. And that if they try to pull that stunt again, you’re gone.

Instead, declare yourself a victor with your own voice. Otherwise you’re nothing but a copy machine.

Remember: Your true colors are very bright. Do not let people dull them. Within each of us there is a spirit ready to respond to the world. That’s weapon that wasn’t meant to be holstered. Are you willing to stand up for what you believe at the cost of alienating people who don’t matter?

4. Create a juxtaposition that creates a reaction. While sitting outside of a local coffee shop yesterday, I watched two canvassers struggle to engage passerbys. During their break, I approached them and asked, “Have you guys ever thought about buying hot chocolate and handing out drinks to people instead of annoying them?”

The two girls laughed. I guess they thought I was kidding.

“Seriously, that would work,” I explained more passionately than necessary. “Think about it: It’s cold, it’s rainy and nobody wants to talk to you. But by unexpectedly offering hot chocolate, you’d break the pattern of predictability. And by delivering value first, you’d earn conversational permission. Ultimately, you’d engage people in a non-threatening way instead of verbally spamming them with unwanted noise about your cause.”

They stared at me like I was a homeless meth addict convinced he was Jesus.

I shrugged and walked away. Guess breaking the mold isn’t part of the Greenpeace Outreach Training Program. Sucks for the whales. What type of reaction are you creating through juxtaposition?

5. Assertively choose (not) to take action. As much as I advocate execution, sometimes the best way to break the mold is to do nothing while the rest of the world scrambles in fear. I’ve actually tried this before, and the results are stunning. Silence truly is eloquent testimony. And the world almost always pays attention, too.

Try this: Next time chaos erupts, choose not to mindlessly follow the masses with the standard-issue fight or flight response. Instead, try the third option. The one nobody tells you about:

Become the calmest person in the room. The strength of your stillness will shatter the mold into a million pieces. Remember: Courage comes from the paths you choose not to pursue. What action can you avoid this week?

6. Pick the box that says, “Other.” The world will try to put you in a box. And by “the world,” I mean: Parents. Friends. Customers. Coworkers. Colleagues. Competitors. Bosses. Strangers. The media. Organizations you belong to.

For example, in my professional association, there is a form all new members fill out to indicate the topic on which they give presentations. There’s only about two-dozen options. And unfortunately, no boxes for “approachability,” “execution” or “making a name for yourself.”

Which is precisely why I picked the box that says, “other.” Because I don’t need their box. And neither do you. In fact, the moment you realize that you don’t need people’s box is the moment you are set free. That’s when you look up from laptop and think, “Wait: There’s a mold?” Which box will you pick?

7. You can’t go through life in a straight line. Personally, I was never in the mold to begin with. Hell, I didn’t even know there was a mold. I don’t know about you, but I am under the highest obligations to defy conventional attitudes. It’s who I am. It’s who I’ve always been. And it’s probably who I’ll always be.

What can I say? I was born to be a delightful disturbance. And admittedly, my emotional predisposition for non-conformity has gotten me into some trouble over the years.

Fortunately, nothing serious. Nothing that hurt anybody. Nothing I wouldn’t update on my Facebook status. And nothing I’ll be ashamed to tell my grandchildren about. But I still chose to make waves, stilled rocked the boat and still shook people out of their petty preoccupations. Because in my experience, that’s the only way anything gets upgraded. Do you refuse to be satisfied with looking just once?

8. Refuse to live a life of zero distinction. George Carlin said it best, “Schools are indoctrination centers where kids are sent to be stripped of their individuality and turned into obedient soul dead conformist members of the American consumer culture.”

Lesson learned: If you want to break the mold, try breaking away from poisonous orbits. And not just schools. But whatever force, organization or corporate monolith attempts to crush your spirit – be conscious of their power. Be careful whom you listen to.

And remember that there’s no point in being scared of the system. That’s nothing but a waste of energy. Instead, as the voice inside you grows more urgent, channel your ambition into an organized campaign of disquiet.

Take what’s inside, push it out in an unrestrained manner and bring truth to power. That’s how you become an artist, says Nietzsche, who believed that art raises its hand where creeds relax. Is yours ready to flail in the air?

REMEMBER: Breaking the mold isn’t (just) about being different.

It’s about doing your own thinking.
It’s about crushing the confines of convention.
It’s about being the exception to as many rules as possible.
It’s about becoming the person you were before the world made you into what it wanted you to be.

Do that, and you won’t just break the mold – you’ll shatter it.

Then again, you could always do what I do and say, “What mold?”

After all, the best way to break the mold to remember that it doesn’t exist.

LET ME ASK YA THIS…
What are you breaking?

LET ME SUGGEST THIS…
For the list called, “15 Ways to Out Learn Your Competitors,” send an email to me, and you win the list for free!