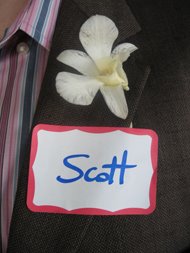 I’ve been wearing a nametag every day for the past 2,695 days.

And I’m often asked WHY I choose to wear the simple, plain-white, handwritten nametags that only display my first name.

Those are all fair questions.

Unfortunately, I can’t offer a simple answer, since there IS an entire philosophy behind this choice.

Anyway, I’ve given this issue a lot of thought – eight years’ worth, in fact – and I’ve come up with ten reasons handwritten nametags are the best way to go:

1. HANDWRITTEN is simple and vague enough to start or advance the conversation. So, it allows people to guide the encounter into whatever territory they wish by asking open ended, get-to-know-you questions. (Hopefully NOT, “So, what do YOU do?”)

2. HANDWRITTEN IS manages the environment, not the people in it.
The nametag is like a little, friendly nudge forward into the direction of human conversation. It doesn’t control or limit people’s actions or words. It just lets things organically and naturally occur according to their own pace and instincts.

4. HANDWRITTEN is pure. No logos. No job titles. No “HELLO, my name is…” (Isn’t that kind of repetitive?) No acronyms, degrees or designations. Just the name your mama gave you.

5. HANDWRITTEN is non goal-oriented and outcome independent. So, it’s not about making a sale, scoring a date or converting a stranger. It’s about (actually) practicing friendliness. It’s about sticking yourself out there for the benefit of others. Creating an approachable, safe environment in which friendly conversation naturally emerges. That’s it.

6. HANDWRITTEN leads with your person, NOT your profession. Values before vocation. Individuality before industry. Personality before position. After all, not everybody is defined by his or her jobs. That’s why it’s called a “name” tag, not a “job title” tag. Not to mention, most people don’t (really) care what you do for a living. They care what you’re passionate about. They care who you ARE.

7. HANDWRITTEN doesn’t pigeonhole you. See, as soon as people find out where you’re from, what you do, what your job title/position is, or what your last name is, stereotypes are likely to surface. “Oh, she’s a banker…” “He’s a Mormon…” “Look out! “Eep! His last name is Hussein!” Dude, who CARES? That’s why a plain, nice, white tag with a simple colored border and a singular moniker like, “Scott” allows people to know you first as a HUMAN, not a statistic.

9. HANDWRITTEN is comfortable and non-threatening. Whereas (some) nametags may be intimidating, i.e., nametags for people in positions of authority, nametags for professionals of certain industries or nametags for members of controversial organizations.

10. HANDWRITTEN is less likely to create negative silent dialoguing. If someone sees you wearing a simple, handwritten, one-name nametag, all they can really say to themselves is, “Well, I guess that guy’s name is Scott!” As opposed to, “Oh, great. looks like Scott works for that big insurance company. I bet he tries to sell policies to EVERYONE he meets. Better not make eye contact!”

LET ME ASK YA THIS…
What type of nametags do YOU prefer?