Every time we get lost, we make our world bigger.

Our most valuable teachings come when our plans are disturbed. Our greatest transformations occur in the moments when we’ve lost our way. And our finest symphonies assemble when we turn a humble ear to the most unintentional music.

But when we make gods out of our plans, when we scrub our world clean of surprise, and when we preserve our sense of control by choreographing every goddamn minute of our lives, those unexpected turns never seem to take initiative toward us. And we shut the door on an entire orbit of opportunity that could change us forever.

Sadly, the chorus of voices tells us that if we don’t know where we’re going, we may never get there, or that any road will take us there.

To which I respectfully say, bullshit.

I can’t imagine living in a world where we can’t get lost.

Are you making your own map?

For the list called, “35 Ways to Leverage Your Next Media Appearance” send an email to me, and you win the list for free! 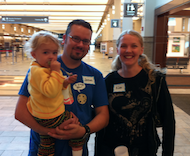 A hundred years ago, most scientists completed their best work before age forty.

Einstein, who identified his theory of relativity at age twenty-six, claimed that if a scientist had not made his greatest contribution by that age, he would never do so.

Of course, it’s all relative.

Life expectancy was dramatically lower. There was fraction of the information available. And the population of the world was under a billion.

Still, the relationship between youth and innovation never went away. History notwithstanding, young people have always landed on the forefront of invention.

And the fruits of their labor changed everything.

Because the young mind; the fertile, beautiful, innocent landscape that it is; has an inherent ability to question, play, wonder and explore all that it encounters.

And our challenge in the next hundred years will be nurturing and preserving that landscape before adulthood bulldozes it into a shopping mall.LET ME ASK YA THIS…
What are you afraid to create?

For the list called, “23 Ways to Make Your Fans Super Happy,” send an email to me, and you win the list for free!