2. Comfort zones are overrated. You have ZERO business in your comfort zone. How dare you! How DARE you. If you want to learn, grow, expand and evolve, you need to stick yourself out there. Out yourself in positions and situations that make you sweat, shake and scared. Every day. How did you scare yourself yesterday?

3. Feedback is overrated. Especially when it comes from losers. Trash the evaluations. Learn to trust your inner judge. Decide for yourself how well you did and let rest go. All it will do is bring you down, annoy you and depress you. Whose words are you allowing to make you second-guess yourself?

4. Inspiration is overrated. If you only create when you’re inspired, your body of work will NOT be smokin’ hot. Inspiration comes unannounced. You need to make ideas come to you, whether you’re in the mood or not. You need to get into a daily routine that enlists your Muse and invites creativity no matte what. How are you supplementing inspiration with perspiration?

5. Paraphrasing is overrated. Instead of all those tried, obvious and insincere active listening techniques that do nothing besides make people THINK you’re a good listener, try actually repeating the exact words they said. It’s respectful and smart. Are you really listening or just trying to look like a good listener?

6. Plans are overrated. Just go. Don’t be stopped by not knowing how. You’ll figure out the How later. For now, just get started. Just go. More Planning = Less Executing. Stop talking your ideas into the ground and go do something. What paralyzes your ability to execute?

7. Talent is overrated. It only gets you about 1/16 of the way there. The rest is supplemental. The rest is hard work. Talent isn’t worth JACK unless it’s supported by commitment, creativity and consistency; discipline, determination and desire. What do you have going for you besides your innate skills?

8. Well-roundedness is overrated. Find a niche and OWN it. Pick a lane. The narrower the better. Find the ONE thing you do better than anyone in the world, then just do that all the time. Either (1) Ignore or (2) Get someone else to do everything else. What consumes your time but doesn’t make you ANY money?

LET ME ASK YA THIS…
What do you think is overrated?

LET ME SUGGEST THIS…
For the list called, “31 Uncommon Practices that Lead to Wealth and Wisdom,” send an email to me, and I’ll send you the list for free!

Never the same speech twice.
Always about sticking yourself out there.

I no longer have patience for people who use these two words interchangeably.

Different is NOT the same thing as unique.

I’ve researched, surveyed my audience members, written extensively and thought long and hard about it.

And here’s what I’ve come up with:

DIFFERENT stands out among people.
UNIQUE draws in from people.

DIFFERENT is memorable.
UNIQUE is unforgettable.

DIFFERENT uses “props” and tangible things to put yourself on display.
UNIQUE uses your personal truth illuminates you from within.

REMEMBER: Don’t run out and try to do something “different.”

Stay put, find out what already makes you unique, and just BE that.

LET ME ASK YA THIS…
Are you unique or just different?

LET ME SUGGEST THIS…
For the list called, “46 Marketing Mistakes Your Company Is (Probably) Making,” send an email to me, and I’ll send you the list for free! 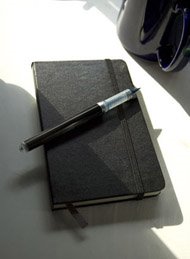 PICTURE THIS: You’re on a road trip. It’s been several hours now. Almost there. Just a few more miles to go.

And that’s when it hits you. A killer idea. The thought of the day. Gold Jerry Gold!

OK, as soon as I get to my hotel, I’ll grab some stationary and get the idea down on paper, you think.

Twenty minutes later, you check in. You walk into the room. You throw down your bags, plop onto the bed and grab the notepad next to the phone…

It’s gone. You can’t remember. You sit there for ten minutes, scouring your brain for the idea from earlier, but to no avail.

Ah screw it, you finally say. If I couldn’t even remember when I got home, it couldn’t have been that good of an idea.

HERE’S THE REALITY: If you make an appraisal of your idea before it’s even written down, you’re assuming and operating on the assumption that “how good or bad an idea is” (especially in the early stages of that idea’s development) actually matters.

Good or bad means NOTHING.

Assigning value to your ideas before they’ve been brainstormed, explored and expanded is a creative block.

This causes you to fall victim to premature cognitive commitment, which prevents your idea from blossoming into its truest and strongest potential.

The idea simply IS. That’s it. No adjectives allowed. So, stop judging. Stop evaluating. Stop appraising.

Write everything down, as soon as it enters into your brain. Don’t worry how amazing, how ridiculous or how insane the idea sounds, just get it down.

LET ME ASK YA THIS…
How many of your ideas have you talked yourself out of?

LET ME SUGGEST THIS…
For the list called, “10 Best Books on Creativity You’ve Never Heard Of,” send an email to me, and I’ll send you the list for free!

No time to write?
Can’t finish that book?
Dog ate your last article?

Come to the St. Louis Writing Marathon next Friday!

No excuses. Just writing. All day.

I promise it will be the best $20 you’ll spend on your writing career all year.