Moments of Conception 189: The Dancing Scene from In & Out 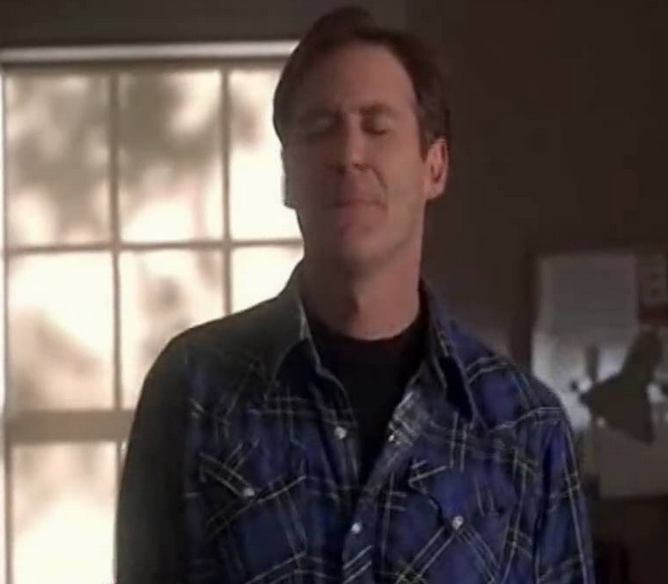 Today’s clip comes from the dancing scene from In & Out:

Closets are for shelves, not selves. Howard has been outed by one of his former students,
and now he’s forced to angrily reassure those who know him that he is actually
straight. But the man doth protest too much. Howard isn’t fooling anybody. He’s
as gay as lemonade sandwich. So after weeks of frustration and confusion, he
ultimately resorts to a self help audio cassette as a final measure to restore
his heterosexuality. And this result is one of the great all time iconic dance
scenes in modern cinema. This movie is an honest reminder that, gay or
straight, we’re all coming out of the closet about something. We’re all trying
to uncover facets of our identities that have been obscured by external and
internal forces. Because we can only closet off the unholy parts of ourselves
for so long. No matter how many audio tapes we listen to, we can’t run from
what we are. We all end up dancing around the living room eventually. And so,
whatever darkness is inside of us, eventually, somewhere, is going to come out.
But the good news is, once we give people a profile of our soul, once we start
talking about what we’re afraid for them to know about us, our world changes.
We experience the freedom that comes from refusing to hide. What’s more, their
world changes too. Because those brave enough to listen will use our stories as
mirrors that reflect their truest selves. At
a certain point, when will your life do the math and out you?

A needle in a stack of needles. It’s one thing to take pride in your identity. But it’s
another thing to turn personal narrative into a religion and disappear down the
rabbit hole of your own mythology. The reality is, nobody is paying as much
attention to you as you are. It’s nothing personal, people simply don’t have
the bandwidth anymore. Millions of people are trying to make their ideas more
popular than yours. Tens of thousands of bits of data and stimuli and noise are
coming at them faster than their constitutions can handle. And so, the
assumption that they’re going to take the time to find a needle in a stack of
needles is ludicrous. This was a grim reality for me to accept. After all, attention of other people is the
most irresistible of drugs. When I started my career, it was still
possible to cut through the clutter. Getting noticed wasn’t yet an exercise in
futility. If you delivered the right message at the right time to the right
person through the right channel, you might actually engage the world with a narrative that won them
over. But not anymore. Now, most people are just not paying attention. I’m
reminded of an interview with a filmmaker who said he purposely started
making his films twenty minutes too long. When asked what his reasoning was, he
said people’s attention spans were getting shorter, and he wanted them to
suffer. Yikes. The point is, we have
to empty ourselves of expectation. We can’t be attached to any outcome. If our
remarkable identity is met with crickets, we can’t take it personally. Are you exerting your identity for its
sake, or for the attention and applause?


It doesn’t
matter how many people don’t love you. I’ve received a lot of hatemail over the
years. Apparently wearing a nametag everyday bothers people. So much so, that
they feel the need to call me names and ridicule my brand and tell me how
worthless my existence is. I remember one letter that said, you’re nuttier than a bag of trail mix!
How sweet. And admittedly, the first few hundred letters hurt my feelings. But
eventually, the hatemail just became a source of entertainment for me. Proving,
that identity is a journey of acceptance. Not only the accepting yourself, but
the accepting other people’s experience of your self. Positive or negative. Especially negative. After all,
your being is not something everybody is going to be on board with. I once read
inspiring book about real love that addressed this very topic. The author suggested
we tell our truth, even when we’re not certain we’re being accepted. To be
honest with ourselves long enough to see the positive effect that always
follows. Because although some people will attack us when we tell the truth
about ourselves, the bottom line is, it doesn’t matter how many people don’t
love us. Besides, people’s
power over us is inversely related to our need for their approval. Once we accept that there’s
nothing we could say that would make us good enough in their eyes, liberation
ensues. In what situations do you have
difficulty accepting yourself?

The downstream spoke of a larger strategic wheel
Steal Scott’s Ideas, Issue 006: Hire Ground, Yaytred & Subwayste
There is a wholeness waiting to express itself