The Fleetwood Mac Guide to Going Your Own Way 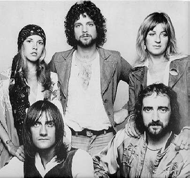 “Remember to wear your dark suit!”

That was the advice my roommate gave me two hours before the career fair.

Unfortunately, I didn’t own one. Or any suit, for that matter. So I did what any smart college senior would have done: Drove to Goodwill and bought one for seven dollars.

Later that day, with a stack of resumes in my hand, I headed toward the auditorium.

And as I walked across the threshold, amidst a sea of stale, corporate exhibits, piles of free notepads and hundreds of fellow students hopping from booth to booth trying to prove themselves to people they didn’t even like, one question entered my mind:

“What the hell am I doing here?”So I went home and finished my book.

Fleetwood Mac was right: When you open up, everything’s waiting for you.

That’s the beauty of going your own way. And if you’re even teetering with the idea of doing so, you might want to consider a few of these ideas first:

1. Accept the uncertainty of the journey. Personally, I love not knowing. It inspires the hell out of me. In fact, I think intelligence can be impediment. Because if you think about it: If you knew what you know now, you probably never would have started.

Instead, try this mantra: “Don’t be stopped by not knowing how.” That’s what I live my life by. After all, life is boring when you know all the answers. And sometimes what you know limits what you can imagine. In my experience going my own way, you have to leave room for the unexpected. To attend to life wherever it moves. And to get lost regularly and excitedly.

Otherwise you end up giving up on the moment before the miracle shows up.

Look: Hugging uncertainty is an act that entails commitment of the heart. And it will take all of you. But without it, your addiction to knowing how will make the journey a lot rockier.

Remember: Uncertainty is an exhilarating dance. Take its hand and spin it for the world to see. Have you accepted fear as an inevitable part of the equation?

2. Grow smaller ears. A few thousand years ago, stoic philosopher Epictetus wrote, “If you go your own way, prepare for reactions.” He was right: Whatever you commit to, there will always people waiting for you to fail.

But the reality is: If people can’t respect you for going your own way, their respect isn’t worth having in the first place.

Don’t be oppressed by those who try to silence your individuality. Don’t be destroyed in response to someone’s invitation to stop living. And don’t be limited by the thoughts that other have set in motion for you.

Give up your obsessive need for approval from anyone other than yourself. Learn to believe in the availability of your own answers. Do you have the courage to follow your inner guide even if you look like an idiot and risk alienating those who don’t understand?

3. Find adequate moral support. The hardest part about going your own way is going it alone. Sure, it’s great for productivity – but where’s the fun in celebrating your victories when nobody’s around to watch you blow out the candles?

I’m all for doing the work to please yourself – but I’m also tired of being lonely.

The secret is: You can’t force it. When the loneliness creeps in like a mist, sporadically calling everyone you know to compensate for the anxiety is like eating a huge bag of Twizzlers, then crashing three hours later.

My suggestion: Instead of digging your well when you’re thirsty, set up your life up in a way that the water is always flowing. And like a human oasis, it will be there when you need it. Then, just remember to live your life as a thank you in perpetuity to the people who reside there. Because if you forget who helped you on the way up, it’s going to be a lonely fall on the way down. Who’s got your back?

4. Calculate your own currency. Every endeavor needs cash to thrive. Even charities. Make no mistake: Non-profit is a tax code, not a goal. However, while profit is a healthy form of applause, money isn’t the only thing that matters. Your challenge is to figure out what your currency is.

Here’s a counterintuitive way of doing so: Honestly admit what has never been part of the equation for you.

As an author, for example, people frequently ask me how many books I’ve sold. And I have no idea. Nor do I care. Number of copies sold isn’t currency that’s important to me. The cool part is, by owning that, I’ve learned what is important to me: Contribution, legacy and reader engagement. And I have a boatload of that.

Decide what you want via the process of elimination. It’s less threatening and intimidating. Otherwise you’ll be so focused on making money that you’ll forget to make a difference. What’s your personal definition of wealth?

5. Getting stopped in your tracks helps you own the path. If you think taking the first step is hard, wait until you encounter your first obstacle. Yikes. Resistance will knock you on your ass so hard your teeth will hurt. Then again, just imagine the resilience you’re developing. We should all be so lucky.

Besides, as long as you view your obstacles as inconvenient – not insurmountable – you’ll make it out alive. As my friend Rusty reminds me, “Attitude is the only difference between an ordeal and an experience.”

The key is to stop battling the resistance and start befriending it. Identify what lesson life is trying to teach you by asking the following question, “How can I use this situation as an opportunity to learn something about myself and change for the better?”

Remember: If there’s no resistance, you’re doing something wrong. Accept the obstacles as part of the path and answer the invitation to evolve. Are you willing to greet the resistance with a welcoming heart?

6. Put yourself in the way of success. Opportunity never stops knocking – you just stop listening. Or, you do hear the knocks, but because opportunity comes disguised as hints, whispers, clues, mistakes and discomforts, you choose to ignore them. If you want to turn embers of possibility into blazes of reality, you’ve got to take the initiative path.

In the book Poke the Box, Seth Godin calls this instigation capital, or the desire to move forward combined with the ability and guts to say yes.

“Many people and organizations have money, networking abilities, smarts, tools and a great reputation. But the key ingredient they are lacking to make it successful is the ability to move forward. And the market responds to the power that comes with this kind of capital.”

HERE’S THE REALITY: Going your own way can feel like digging your way to hell with a plastic fork.

But it sure beats going to the career fair.

Instead of one-size fits all, try my-size fits me.

Everything’s waiting for you.

LET ME ASK YA THIS…
Have you learned to fall in love with your own set of blueprints?

LET ME SUGGEST THIS…
For a list called, “153 Quotations to Inspire Your Success,” send an email to me, and you win the list for free!

How to Elevate Your Employabilty, Part 3
Win a Copy of The Nametag Guy’s Ebook When You Buy Social Boom!
The Art of Making People Feel Seen