Does Your Organization Pass the Rice Paper Test? 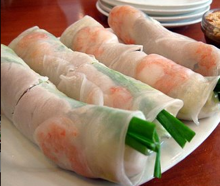 Fresh out the box, it looks like a paper plate.

Dab a little water on it, wait about sixty seconds – and it morphs into a playful, clear and stretchy material that perfectly protects your delicious food, yet carries no shame about the contents within.

What’s interesting is, rice paper is surprisingly strong. And durable. And it seems that no matter how many vegetables you stuff inside of it, it never rips.

Huh. I never knew transparency could be so effective.

What about you? Does your organization pass the rice paper test?

If not, here’s how your bottom line can expect to suffer…Transparent companies are more trusted, according to a recent survey conducted by Brigham Young University’s Department of Communication.

Their research proves the link between corporate openness and employees’ belief in the companies they work for. The study, run by Dr. Brad Rawlins, asked employees across all parts of the business questions about trust and transparency. And their survey of over four hundred healthcare workers found statistical evidence for a link between how open companies are and how much their employees trust them.

That’s what happens when your organization passes the rice paper test. And since trust is the only currency that counts, the lesson is simple:

When you open yourself to the world – the world will opens its wallet to you.

Here’s a list of ideas to help make your organization more transparent:

1. First things first. Before you’re everywhere, you better know you who are, what you do and why you do it. Otherwise it won’t matter where you end up because nobody will recognize you – including yourself. As comedian Russell Brand told The New York Times a few weeks ago:

“Fame is a hollow and brittle experience if not nourished and underscored by something valuable.”

The secret is to sit down and ask yourself, your team and your organization three questions. But not just any questions – the big ones: Who am I? What do I do? And why do I do it?

And if you’re serious about transparency, here’s an exercise guaranteed to change you and your organization forever: Grab three sheets of paper. Write one of the above questions at the top of each sheet. Next, number each page from one to a hundred.

Then, spend the next week answering each of the three questions – one hundred times each. For a total of three hundred answers. It will be the hardest thing you’ve ever done. The self-confrontation alone might kill you. But I promise: You have no idea how powerful this exercise is.

I just finished it myselF and can legitimately say it was the most profound self-exploration activity I’ve ever tried. Remember: Your identity is your most valuable possession. When was the last time you reacquainted yourself with it?

2. Retire your low profile. Earlier this year, Corporate Responsibility Magazine released its first annual list of the thirty least transparent companies, exposing those organizations that choose to hide in the dark. The list covers a variety of industries, ranging from Abercrombie & Fitch to Fidelity Investments to Weight Watchers.

But when asked what gets you on the black list, author Jay Whitehead revealed the universal mistake: “Share no data beyond what is legally required.”

On the other end of the spectrum, companies like Zappos embrace transparency to an astonishing degree. Tony Hsieh, billionaire founder of the company, pursues disclosure that most executives would consider freakish. But in his experience, “The more they know about us, the more they’ll like us.”

That’s the cultural shift: It’s not how well you know your customer – it’s how well your customers know you. Plus, how willing they are to share that knowledge with their friends. After all, what people remember about you is who you are.

3. Be gloriously explicit. People are tired of being lied to. People are sick of wading through the ever-rising tide of corporate and political hogwash. And people are forever jaded from the countless times they’ve been burned, duped, fooled, conned, scammed and screwed over.

Provide information that’s truthful, substantial and reliable. If you can do that – online – at least a few times a week, people won’t just pay attention, they’ll pay dividends. And the best part is: You don’t need a budget for transparency. Humbly exposing your own heart is something paid with bravery, not bucks.

You just have to make it your mission to provide more honesty per square inch than anybody. And you have to remember that honesty is three things: Telling the truth, honoring your truth and respecting other people’s truth. Are you willing to live with the consequences of being honest?

4. Secrecy is an endangered species. The reason younger generations willingly forego their online anonymity is because they don’t know any better. As digital natives, privacy was never an option. From profiles to preferences to pictures, from status updates to streaming videos to geographic locations – radical transparency was just something they did because was something everybody did.

It became the norm. And the danger, if you choose not to do it, you instantly became untrustable. You’re like the guy in the parade who refuses to wear the ribbon. May as well strip your truth bare for the entire world to see.

Here’s how: Broadcast past screw-ups. Publicize your current failings. Set up an online water cooler to blog publicly and freely about your new projects. Install company wikis where people can complain about problems and suggest solutions. Make your content searchable. Any of these strategies will enable you to enlist the help of your global braintrust.

Look: You’re already naked. May as well start dancing and see who joins you. Are willing to conduct business in the buff?

5. The Internet rewards transparency. People aren’t reading the Wall Street Journal to learn who you are. They’re searching blogs, social media feeds, discussion boards and online community threads. And if you’re not a player in that world, you’ll be left behind with the rest of the dinosaurs.

“The reputation economy creates an incentive to be more open, not less,” writes Clive Thompson from Wired. “And since Internet commentary is inescapable, the only way to influence it is to be part of it. Being transparent, opening up, posting interesting material frequently and often is the only way to amass positive links to yourself and thus to directly influence your reputation.”

The reality is: Customers and employees are poking around anyway.

Because if you don’t make transparency your natural tendency, people will start to wonder why you’re not open like everyone else. The time has come to peel away the pretense and serve up a bolder truth. Don’t worry: You can still show yourself to the world without getting arrested for indecent exposure. Are you free enough to risk being seen by people?

6. Turn customers into working partners. Netflix offered one million dollars to anyone who could improve the accuracy of their movie recommendation algorithm by ten percent. That’s the coolest thing I’ve ever heard. It takes guts, vulnerability and humility.

The secret lies in surrendering control. Enabling people to take your idea into their own hands and make it better. And openly embrace a fan mentality and transfer ownership to the customer. That’s how transparency enables spreadability and spreadability grows into long-term viability. You’ve got to find people that have big mouths, share your world with them – give them megaphones – and then get the hell out of the way.

However, before you start delegating product design to the first guy that shows up at your front door, there’s a question you still have to consider: What do you see when you see people?

The answer to this question underscores everything you do. Everything. For example:

At your company, are your customers the people who buy you, or the partners who bolster you?

At your organization, are new members the integers on the annual report, or the individuals behind your movement?

What. Do. You. See. When. You. See. People. Answer that question first. Then let them go crazy. Have you joined hands with the folks who matter most?

7. Take your own hiding places away. I remember the first time I ate a restaurant with an open kitchen: I was twelve, I was somewhere in Florida and I thought it was the coolest thing ever. Later when the chef delivered our food, I asked him why there were no walls. And his answer was something I never forgot:

“We’ve got nothing to hide.”

What is your organization hiding? What ideas do you have that you’re afraid people will steal?

Because I’ve got news for you: There is nowhere to hide. Everything matters, everybody’s watching and everything’s a performance.

Maybe your office needs more mirrors. Not literal mirrors, necessarily. Just something – or someone – to consistently offer a reflection your truth as the world sees it.

I don’t know about you, but I love mirrors. They lay it naked. They reveal the lies you tell yourself. They offer everything you hate about yourself, staring back at you. Doesn’t get more transparent than that. How self-confrontational are you willing to become?

LOOK: You can’t place a red seal over the door of your heart for much longer.

Share your voice or make your exit.
Take your corporate skin and turn it inside out.
Willingly strip yourself of your inconspicuousness.

And as you stand there, naked and pulsating, wide open for the world to see, your courageous transparency will evolve into copious currency.

Take your organization and put it out there on a platter for people to relate to, eat up and tell their friends about.

LET ME ASK YA THIS…
How transparent do customers and employees believe you are?

LET ME SUGGEST THIS…
For the list called, “6 Ways to Out Position Your Competitors,” send an email to me, and you win the list for free!