6 Steps to a More Fearful You 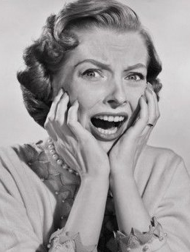 But you’re never scared of anything, there’s something wrong.

Fear is a healthy, human reality. It’s an essential part of the life experience. And sometimes you have to scare yourself for the right reasons.

But if you’re trying to scrub your world clean of it, you’ll never reach your full potential.

As my therapist famously told me, “The healthiest way to handle your fear is to change your relationship to it.”

Here are six steps to a more fearful you:1. Instead of fighting with it – bow to it. Accept the bid. Honor it. And greet fear with a welcoming heart. Respond with an expansion; don’t react with a contraction. How to do you extend namaste to that which scares you?

2. Instead of complaining about it – give thanks for it. Be fundamentally affirmative. Extend gratitude for fear’s arrival. It’s here for good reason. Are you grateful for that which scares you?

3. Instead of running from it – make friends with it. Don’t fight. Don’t flight. Don’t freeze. Befriend. That way it can’t hurt you. Are you willing to buddy up with that which scares you?

4. Instead of waging war against it – put your arm around it. By approaching fear as an ally, you redirect its power into something useful. Can you join forces with that which scares you?

5. Instead of putting a blanket over it – learn an important lesson from it. Fear is the final compass for finding what matters. Please listen. Can you grow from that which scares you?

6. Instead of being taken over by it – decide what fuel can be made from it. Fear is a wave waiting to be surfed. Let it carry you to bright new shores. Will you energize your efforts with that which scares you?

REMEMBER: You have nothing to fear but fear of fear itself.

Stop ignoring it and start investing it.

The dividends are worth it.

LET ME ASK YA THIS…
When was the last time you scared yourself?

LET ME SUGGEST THIS…
For the list called, “24 Ways to Out Grow Your Competition,” send an email to me, and you win the list for free!

To Those Who Would
Watch Scott Ginsberg’s Entire Keynote Speech on Personal Branding
Adventures in Nametagging: Thieves, Yogis and Silver Suits