Next year is going to be the best ever for your business.

But only if you enhance your company’s usage of the following three words: Knowledge, reassurance and conversations. Straight from my regular column on American Express Open Forum, consider these ideas:

1. Knowledge. The tendency is to hoard knowledge is a seductive one. It makes us harder to replace, enables greater leverage, increases promotability and gives us a competitive advantage.

But a lot of the time, in those moments when we operate from a scarcity mentality, we act selfish with our knowledge. We avoid telling people what we know for fear of losing power. And then everybody loses. Like pushing a rock up hill with one eye over our shoulder, it’s not especially productive, it doesn’t contribute to the greater good and it rarely proves to be a worthwhile investment of time and effort. But thanks to the connective beauty of the Web—via blogs, social media, discussion boards, forums and other digital platforms—we’ve found a way to reverse the trajectory. With the click of button, we send the snowball down the hill, hoping it will grow a little bit more with each revolution, growing a little bit stronger with each person’s individual contribution. Knowledge might be power, but sharing that knowledge with others is priceless.

2. Reassurance. When privacy is at stake, reassurance is priceless. I once gave a workshop to a document destruction company. Their specialty was paper shredding and hardware demolition, mainly for large financial institutions. Stockbroking firms paid them big bucks to destroy old client records, annual reports and other sensitive materials.

Naturally, prospective clients were skeptical. Outside of the standard disclosure agreements, and outside of whatever trust was established between the firm and the destruction company, there was really no way to guarantee that their information could be fully protected. So I asked the president how he handled the issue of client privacy. And said that most players in his industry struggled with it. To the point that it became a barrier to growth.

“But at our company, it’s easy,” he said, “Most of my employees can’t read.” Wait. What? That’s right. The majority of his warehouse staff was blind, mentally retarded or cognitively impaired. They didn’t steal the information because they couldn’t read it.

That’s reassurance. And don’t forget, this document destruction company staffed dozens of permanent and temporary workers each year, most of whom could never get a job anywhere else because of their preexisting conditions. That’s reassurance too. I wonder what your company does to deliver it.

We might create acts that make emotional connections while the rest of the world is bothering and interrupting people with advertisement. That’s a smarter conversation. Point being, customers already have everything they need. Except us. In the flesh. Ready to listen to them. Why don’t we sell that?

Next year truly can be the best year ever, as long as you implement these three words.

LET ME ASK YA THIS…
Will your business be ready for January 1?

LET ME SUGGEST THIS…
For the list called, “17 Behaviors to Avoid for Effective Listening,” send an email to me, and you win the list for free!

I published my first book when I was twenty-two.

There was no plan. No marketing strategy. No publicity campaign. No social media push. No finely orchestrated plan in perfect alignment with my personal vision statement and life purpose.

I just handed out copies to every single person I knew. With one catch:

Every copy of the book came with two free nametags.

One for you, one for a friend.

Readers loved it. They showed everybody. Some even wore the nametags in public to start conversations – with complete strangers – about my idea.What’s amazing is, people didn’t care that much about the book itself.

They just wanted the free prize inside.

So I spent dozens of hours staying up late the night before speeches, gluing those little buggers into the back of each book. Wasted tons of money. Signed every copy. Burned my fingers with hot glue a hundred times. And hated every moment of it.

It was worth it.

LET ME ASK YA THIS…
What’s your free prize?

LET ME SUGGEST THIS…
For the list called, “7 Ways to Out Attract Your Competition,” send an email to me, and you win the list for free!

LET ME ASK YA THIS…
What’s your act?

LET ME SUGGEST THIS…
For the list called, “71 Things Customers Don’t Want to Hear You Say,” send an email to me, and you win the list for free! 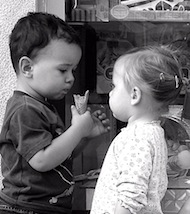 But we can’t solely filter our lives through pixels. Not if we want those lives to matter.

Face-to-face is making a comeback.

I don’t care what line of work you’re in.

Every time we touch each other’s skin, look each other in the eye and talk to each other with our mouths, the world feels a little bit more connected.

Create an act of humanity in a moment of distance.

That never goes out of style.

LET ME ASK YA THIS…
How many people did you go out of your way to ignore last week?

LET ME SUGGEST THIS…
For the list called, “23 Ways to Learn a Lot at a Really Young Age,” send an email to me, and you win the list for free!

“I just have so many questions!”

I get that a lot.

When people find out I wear a nametag everyday, they’re instantly curious about a number of issues. And I’m happy to oblige. Comes with the territory.

I once met a guy in a jazz club in Hell’s Kitchen. Noticing my nametag, he asked me if I had just come from an episode of The Price is Right.

Good guess, but no. Even though I’ve always secretly wanted to be on that show. Just let me play one game of Plinko and I’ll be out of your way.People are enthralled by mystery. They never grow tired of things that invite constant interpretation. And our ability to fascinate them is a tremendous asset.

Like Houdini, we have to emanate an aura of delightful unpredictability.

We have leave the public always wanting more, wondering about our next move.

Never underestimate the profitability of mystery.

LET ME ASK YA THIS…
How mysterious are you?

LET ME SUGGEST THIS…
For a list called, “10 Reasons (Excuses) You’re Not Blogging Yet,” send an email to me, and you win the list for free!

“After investing in your mentoring program, I’ve become centered on who I am and what I have to offer. Now, I am attracting clients I want to work with. Life is great and I just wanted to thank you from the bottom of my heart.”